The CLM system consists of six main components: the base unit, the sample jars (sampling ports in option), the  control panel and power supply, the illumination base, the baffle/dosing module and the shipping carton.

The mixer unit is made up of two main parts:

The housing also has a power jack on the rear (for connection to a 12V DC power source).

The CLM uses one-litre clear acrylic sample containers (jars) with graduation marks at each 50 mL level. As set of dosing syringes of  1-3-5-10 mL is provided for each jar. Sampling ports are optional and coming with a sampling stopcock which attaches to the threaded adapter, a flexible sampling tube with connector, a 50 mL beaker and a cap that can be used in place of the stopcock when subsurface sampling is not required.

The CLM is powered from a 12V DC supply, through a standard power jack on the rear of the unit. The power is provided by the 12V DC plug-in wall transformer supplied with the system.  This transformer is designed to operate with input AC power from 100 to 240 volts, 50 to 60 Hz electrical power allowing it to be used in nearly every country in the world.

Controls for the CLM can be as simple as they could be:

Proper illumination is essential for visual observation of each jar test step of the samples being tested. The CLM system incorporates a high-efficiency LED system for illumination of the base and samples. With an On\Off button on the front panel, the illumination base can be turned On or off when you want.

The baffle/dosing module serves two functions. The first is to provide baffling in the jars, to reduce vortexing and air entrainment at high mixer speeds. The second is o provide a holder for chemical dosing syringes, so that chemicals can be added simultaneously ad accurately in all jars.

To minimize the chances of damage during shipment, the CLM system is packed in a double-wall carton. The base unit is put between two special foam inserts.  This shipping carton should be kept as it can be used as carrying box for transportation in your vehicle. 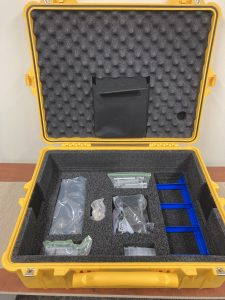 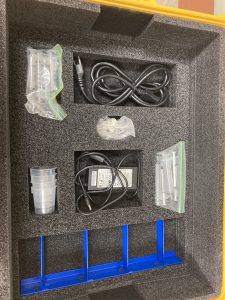 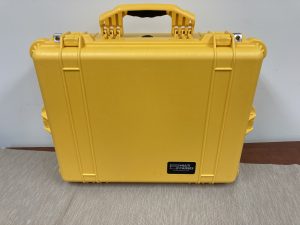